Writing the Experience of Disability

> Writing the Experience of Disability

Writing the Experience of Disability in South Africa

Kobus Moolman is a South African poet and Professor of Creative Writing at the University of the Western Cape.

He has published six collections of poetry as well as several plays, and he has edited an anthology of poetry and prose by South African writers living with disabilities. He has won numerous national and international awards, including the 2015 Glenna Luschei Award for African Poetry.

Professor Moolman’s research focuses on disability studies, the pedagogy of creative writing, and on hybrid genres with a specific focus on forms of contemporary poetry. He is keenly interested in developing the voices of young, up and coming South African poets. He recently published an acclaimed collection of short stories, The Swimming Lesson and Other Stories (UKZN Press, 2017).

His poetry explores his reality as a disabled person living in South Africa. Reflecting on his creative writing, he came to a realisation that has shaped his writing, including the following poems:

“I knew that something was lacking, something was missing from my writing. But I did not know what it was. What was it that I had wanted to say for so long, but had not yet been able to say? What was I concealing from myself, which was preventing my work from reaching past what I already knew […], and finding an other form and other voice? The answer had been staring me in the face for the past forty-odd years. It was not the capitalised Self. The individual ego as I had been expressing it for so long. It was the body. What Seamus Heaney, in his translation of Beowulf (1999), has dubbed a ‘bonehouse’. And it was my body specifically. My knees, my ankles, my back, my shoulder, my wrist, my neck, my bladder and kidneys. It was the body defined in medical terminology as having a congenital spina bifida present from birth from L5 down to S5”

(Kobus Moolman, Autobiography of bone : an original cycle of dramatic poems researching the problematics of reconceptualisation of the formal boundaries between the genres of poetry and drama (2010), pp.283-284)

Click on the below image for a downloadable PDF of a selection of Kobus Moolman’s poems. 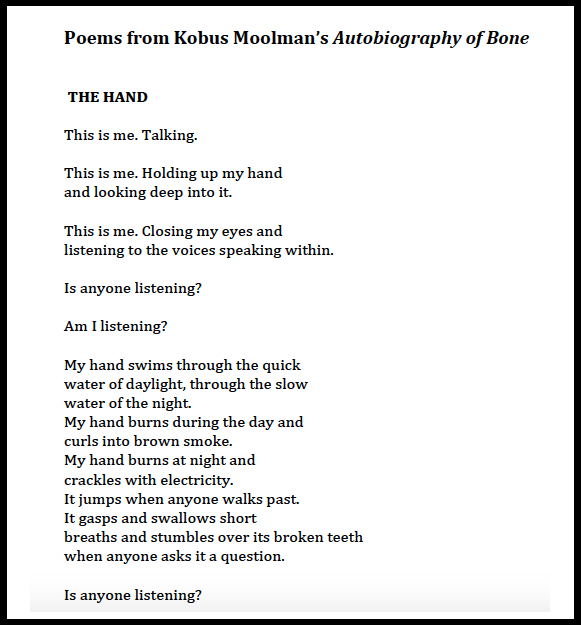 Our latest blog post by Elim Shanko welcomes the increasing ratification of The Protocol on the African Charter on Human and Peoples’ Rights on the Rights of Persons with Disabilities in Africa. #DisabilityTwitter #alternativeexplanations
http://dia-network.com/why-african-states-should-ratify-the-african-disability-protocol/

Coming soon! The call for papers for the 1st Annual Conference of the Disability and Inclusion Africa Network in 2023 will be available in October! http://dia-network.com/workshops/#alternativeexplanations #disabilityinclusion #DisabilityRights #DisabilityTwitter