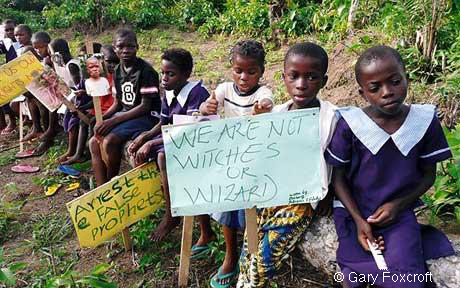 Disability and witchcraft-related beliefs: The work of WHRIN

The Witchcraft and Human Rights Information Networkwas established 8 years ago and its work to raise awareness of human rights abuses related to witchcraft beliefs and find solutions to prevent them has a global reach.

Executive Director of the Witchcraft and Human Rights Information Network (WHRIN), Gary Foxcroft, regularly encounters a range of beliefs attached to disability that vary depending on location and who holds them. Generally, he remarks, explanations are rooted either in beliefs that disabilities have been caused by evil spirits or by other supernatural means, or disability highlights that a person is imbued with special powers, often considered as signs of ‘witchcraft’.

He recalls one boy that his team worked with, Inyang, who had a learning disability. He was taken to a pastor by his father to seek a spiritual understanding of his disability. The pastor diagnosed him as being a witch. Fearing the impact that this perceived witchcraft may have on them, the father and other community members then poured battery acid on him in an attempt to kill him. Inyang was rescued by NGO staff, but despite their best efforts, he died in hospital 2 weeks later.

WHRIN’s work is a response to such human rights violations, that take place around the world due to beliefs in witchcraft and spirit possession. The organization’s work enables greater understanding and awareness of these complex issues so that solutions can be developed to prevent further violations of human rights from taking place.

Why focus on 'alternative explanations' for disability?

People with Epilepsy in Rwanda

Looking forward to listening to amazing papers and presenting at the Disability and African Indigenous Thought workshop on 25th February 2021.

My presentation centres on the "Aetiological Perspectives of Disability in Ghana: A Case of Food Taboos in Pregnancy" @TheDIANetwork https://twitter.com/TheDIANetwork/status/1353674772056576000

We are delighted to announce the programme for our online workshop 'Disability and African Indigenous Thought' on 25 February 2021: http://dia-network.com/workshop-1-ambrose-alli-university-nigeria/ All welcome! To register, please e mail c.baker@lancaster.ac.uk